Following some very free scoring matches in the group stages, the semi-finals were far more cautious affairs. Chile and Brazil played out a dour 0-0 draw and when extra-time couldn't separate the teams it was down to the lottery that is a penalty shoot out. Chile emerged victors after a mammoth 14-13 showdown.

The other semi saw England take on surprise package Oceania XI. The northern hemisphere team proved too strong, grabbing goals either side of half-time to claim a place in the final.

Group 2, England v Italy. The English kick-off what turns out to be a footballing lesson. England head home to make it 3-0 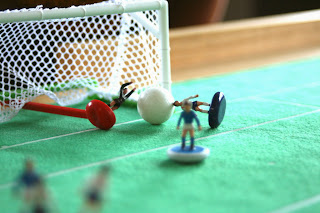 Argentina bear down on goal to grab a late consolation goal. We held the Subbuteo World Cup Competition in early December 2013.

It was an eight national team tournament who played group stages and then Semi-Final & Final matches.

The teams were made up of Subbuteo, Stefan Corda, Santiago and SuperFooty teams on a variety of bases. The Results, Tables and some pictures are presented in my next three posts.

We enjoyed it so much that we plan to do another competition with the same format very soon.

These are the eight teams that took part in the competition

Some action from Group 1.

Australia and New Zealand prepare for their match. The lightweights ran out 2-0 winners. 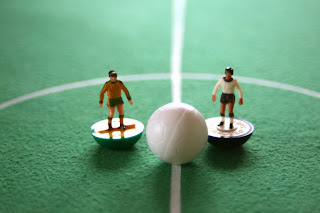 New Zealand take the lead, the ball going in off the underside of the crossbar. Chile and Australia line up before their bad tempered fixture. 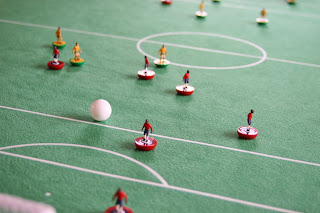 Australia's centre back takes out his frustration resulting in a free kick. 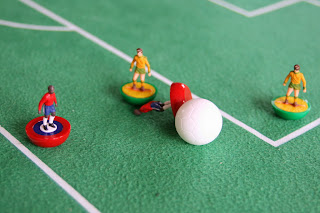 The final results and tables

Subbuteo Hockey was unpopular when it was released and as a result sets are hard to come by.

These red and blue teams came in the box set. 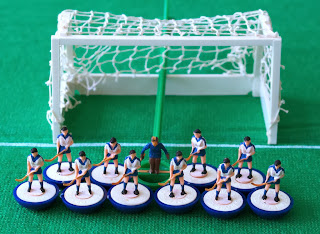 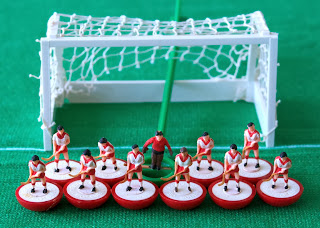 Whilst my daughter shows an interest in football she prefers playing at being a doctor. So this weekend we took the opportunity to mix both past-times using the Playmobil Soccer Match Set.

A little change of focus for today's post which has a South American flavour.  Two very simple kits that I painted a few years back on SCco 2k4 figures. The Chile national team is on Stefan Corda Image II bases while the Santos is on Santiago Spitfire bases.

My son and I gave these two teams a run out at the weekend after watching a documentary about the legendary Brazilian duo Pele and Garrincha.  I'm not sure why the Chile team won out when the natural choice was a Brazil!

We had a busy Subbuteo weekend recreating some of the English Premiership matches as well as playing a Manchester United Home v Man Utd Away fixture using the United Box Set - (my son's reasoning was at least one of them would lose - whilst not accurate it made me laugh). All but one of our matches were played using teams on different bases. I always find it interesting playing matches with teams on different bases as match tactics need to be adopted and changed to get the best from each base type.

I really like the look of the Image bases and the tricolour works well on this Chile team. When it comes to match play I can get a good long curl on them but haven't had nearly enough practise with them to get proficient at curling over short distances. The Santos team is as simple as a paint job can get, but on the lily white, solid base they look stunning. For me the Santiago Spitfire is a great, versatile base and one of my favourites - they have a little of everything.


This concludes the First Division teams that took part in the FA cup in 70-71 Season.
Posted by NGD at 12:11 AM No comments: 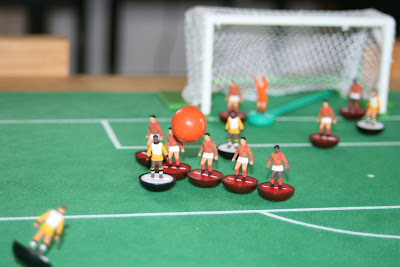 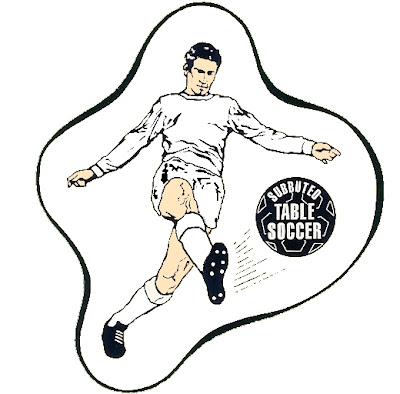